Highlights Ricoh as a worldwide leader in print and document security

Data security remains one of the highest priorities for businesses of all sizes in 2020. Legislation like GDPR and the California Privacy Act (CCPA), along with a consistent stream of news reporting data breaches, highlight the need for companies to take steps to secure their data, documents, and customer information.

In a world where data and document security have become so vital, we are happy to be recognized by the IDC MarketScape as a worldwide leader in security solutions and services hardcopy.

IDC provides market intelligence to business executives and IT professionals through a variety of services helping support sound business and technology decision-making. Active in 110 countries around the world, IDC delivers expert analysis and insight. Their aim is to help businesses achieve their objectives and goals.

Document and Data Security Are an Everyone Concern

Enterprise data breaches get a lot of attention. Why? Typically, those breaches happen on a massive scale, meaning more people are affected.

Despite the attention, enterprises aren’t the only businesses vulnerable to a data breach. In a 2019 executive brief, Verizon reported that 43% of data breaches involved small-to-mid-size businesses (SMBs).1 While an SMB data breach may affect a smaller number of people, that may not always be the case. For example, Target's big data breach occurred because hackers were able to access one of its vendors, an HVAC company.

Whether SMB or enterprise, the cause of data vulnerability for both may be of greater concern. “For many businesses, the print and document infrastructure is one of the most vulnerable to security risks,” notes the IDC MarketScape report.

And printer security isn't only a network security issue. Quocirca’s 2019 Global Print Security report found that in the case of breakdowns in printer security, 32% of the events — which represents the biggest percentage of all causes — are due to accidental user actions.2

An accidental data breach may not sound as bad as being hacked, but a 2018 Gemalto study says otherwise. Gemalto reported 66% of consumers are less likely to do business with a company responsible for a data breach. As the study shows, a data breach does more than damage a business's reputation — it results in lost revenue.3

"Ricoh should also be on the short list of vendors for those companies looking to engage with a strategic partner to develop long-term security initiatives that can grow and expand as organizational needs and priorities evolve."

There is a wealth of information in the 2019 report. IDC MarketScape explains:

“This IDC MarketScape study assesses the market for print and document security solutions and services among select hardcopy vendors through the IDC MarketScape model. This assessment discusses both quantitative and qualitative characteristics that position vendors for success in this important market. This IDC MarketScape covers a variety of hardcopy vendors and is based on a comprehensive framework to evaluate security delivered as standalone features and solutions, within the context of a managed print and document services (MPDS) engagement, and as non-MPDS professional and managed service.”

Companies that met the IDC MarketScape inclusion criteria were named in one of two categories: A Leader or a Major Player.

We were happy to be recognized as a Leader.

Challenges – and Solutions – to Document and Print Security

Documents and data must be secured. They must also be available when needed. In a way, documents must be kept as secure as if they were in a bank vault, and as easy to retrieve as if they were sitting on a desktop.

At first, these two needs might seem to be in opposition. In previous articles, we've talked about data security best practices for small businesses, IT security tips, information governance, and more. Ultimately though, data security comes down to keeping it confidential, maintaining document and data integrity throughout its lifecycle, and ensuring it’s still available when needed.

That’s why we were happy to see the IDC MarketScape specifically note our unique approach to securing document and print infrastructure – the “CIA” principals. “CIA” stands for confidentiality, integrity, and availability.

We invite you to download this excerpt from the “IDC MarketScape: Worldwide Security and Solutions Hardcopy Vendor Assessment” to learn more about the IDC MarketScape’s analysis, the complete list of essential capabilities and strategies, IDC’s recommendations, and why the report stated:

“Ricoh should also be on the short list of vendors for those companies looking to engage with a strategic partner to develop long-term security initiatives that can grow and expand as organizational needs and priorities evolve.”

Thank you for your information.

Thank you for your information. 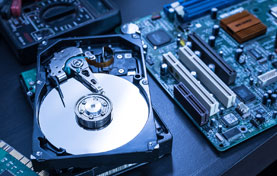 Article: Can your office phones be hacked? Internet-connected work phones pose the same security risks as your computers Ricoh uses data collection tools such as cookies to provide you with a better experience when using this site.
You can learn how to change these settings and get more information about cookies here.